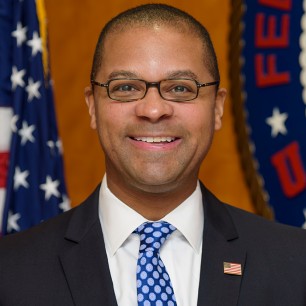 Geoffrey Starks was nominated to serve as a commissioner for the FCC by the president and was unanimously confirmed by the U.S. Senate on January 2, 2019. He was sworn into office on January 30, 2019.

Commissioner Starks has a long career of public and private sector experience. These experiences inform his commitment to working to ensure that no American is left behind in this era of transformative innovation. Most recently, Commissioner Starks served as assistant bureau chief in the FCC's Enforcement Bureau, where he focused on protecting consumers, promoting network security and preserving the integrity of the commission's Universal Service Fund programs.

Previously, he served as senior counsel in the Office of the Deputy Attorney General at the U.S. Department of Justice (DOJ) where he provided advice on domestic and international law enforcement issues, including civil, criminal and national security matters. At DOJ, he received the Attorney General Award for Exceptional Service—the highest award a DOJ employee can receive. Prior to his entry into federal public service, Commissioner Starks was an attorney at the law firm Williams & Connolly, clerked for the Honorable Judge Duane Benton on the U.S. Court of Appeals for the 8th Circuit, served as a legislative staffer in the Illinois State Senate, and worked as a financial analyst. Commissioner Starks earned a Bachelor of Arts degree from Harvard College with high honors and a law degree from Yale Law School.