More than 2,000 leaders of rural broadband companies and their suppliers descended on Phoenix this week for the NTCA 2020 Rural Telecom Industry Meeting & EXPO (RTIME). The event featured educational sessions, panel discussions about emerging policy and business issues and motivational speakers on rural development and entrepreneurship topics.

Although NTCA is still evaluating the FCC’s latest plans for the Universal Service Fund, Hoopes said there are many reasons to be optimistic. He pointed to rural broadband’s important role in contributing to the U.S. economy and noted that NTCA is thinking ahead to what happens after Alternative Connect America Cost Model (A-CAM) and other funding programs are completed, and is beginning to engage with policymakers about Universal Service Fund contribution mechanisms. He added that NTCA continues to engage in innovative thinking with members about the future.

Bloomfield cited some key successes that NTCA members have had, including that over 60% of NTCA members now offer broadband at speeds of at least 100 Mbps, including 25% that offer gigabit speeds.

Bloomfield also highlighted a range of initiatives that NTCA is working on, including:

Anne Hazlett, senior adviser for rural affairs for the White House Office of National Drug Control Policy (ONDCP), joined Bloomfield on stage for a Q&A that touched on the rural opioid crisis and the role that broadband and local broadband providers can play in combating it.

Hazlett noted that addressing the opioid crisis requires better education and prevention, strengthening efforts to stop illegal drugs produced outside the U.S. and recognizing that addiction is a disease.

“Someone who wants help should be able to get help quickly,” she observed.

Hazlett also recognized NTCA for the important role the association played in creating a resource guide about the opioid crisis and that NTCA members can help in addressing the opioid crisis, not only through the technology they provide but through the role that they play as leaders in their communities. By working with other local leaders, she told NTCA members that, “you have the power to connect the assets in your region to solve complex issues like addiction and to create resiliency for the future.”

RTIME also featured updates from the Foundation for Rural Service, an economic outlook from RTFC/CFC and a panel discussion about the future of universal service. Select portions of the opening and closing sessions are available on the NTCA Facebook page.

NTCA has recognized nine rural telecommunications industry leaders for their achievements and service to the industry, their companies and their communities. The NTCA Excellence Awards are presented annually and winners are selected by the association’s Awards Committee which is comprised of NTCA members. This year’s awards were presented by NTCA Chief Executive Officer Shirley Bloomfield during the 2020 RTIME in Phoenix.

This year’s awardees are:

The 2020 Excellence Awards ceremony was live streamed on the NTCA Facebook page.

RTIME Attendees Get 'IN Step' with NTCA GHP Wellness Connections 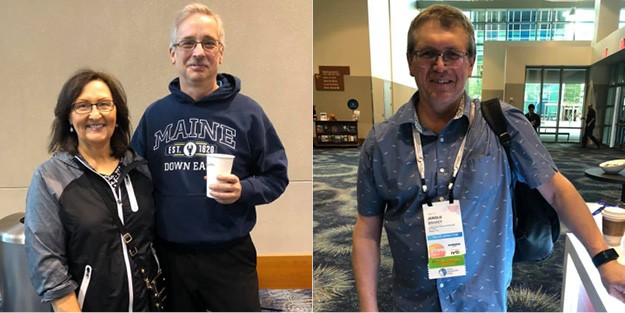 RTIME attendees typically rack up some serious walking mileage, and this week was no exception! Attendees had the opportunity to participate in the NTCA Benefits Get IN Step with GHP Wellness Connections challenge, and leaders were recognized for their miles. Challenge participants simply kept track using the Rally mobile app or their own personal fitness devices and reported their mileage results to NTCA member relations managers during the two-day challenge period.

“Members loved checking the leader board throughout the day to see who was winning,” said NTCA Member Relations Manager Jane Wigen. “Some of our members are very competitive, and many participants said, ‘let’s do this again!’”

Winners of the walking challenge are:

Hamilton County Telephone Cooperative Corporation (Dahlgren, Ill.) received a $3.4 million grant to replace copper wire with fiber-optic cable wire, which will improve connectivity for 603 rural households, 12 farms, and a business in the county.

Notes in the News

NTCA joined a letter to the FCC asking the commission to set a spectrum aggregation limit for its C-band auction so that small carriers are not shut out of bidding. The letter also suggested the FCC mandate that no entity be allowed to acquire more than one-third of the spectrum in a geographical area.