Wicker, Welch Join NTCA and FBA to Talk Building for the Future With Fiber

During a May 23, 2019, event in Washington, D.C., Sen. Roger F. Wicker (R–Miss.) and Rep. Peter F. Welch (D–Vt.) joined NTCA–The Rural Broadband Association, in conjunction with the Fiber Broadband Association,  as the groups unveiled a national Fiber Fast plan. The plan seeks to underline the importance of fiber networks in the buildout and implementation of 5G technology. Specifically, the Fiber Fast plan includes ideas for:
•    Promoting Entry
•    Building Broadband Faster
•    Helping and Sustaining the Business Case for Broadband
•    Modernizing Outdated Regulations
During the event, NTCA Chief Executive Officer Shirley Bloomfield spoke about the importance of fiber in offering high-speed internet 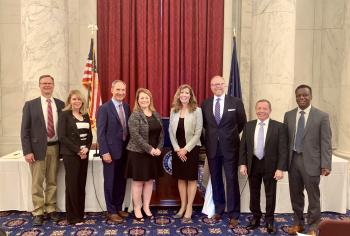 service to all Americans and in future-proofing today’s broadband networks. Bloomfield pointed to NTCA’s Smart Rural Communities program and efforts to support senior care in rural America as initiatives that depend upon long-term investments in fiber technology, and she noted that wireless networks are only as good as the wired infrastructure that support them. Bloomfield also stressed the importance of leveraging programs that have stood the test of time, such as the Universal Service Fund, in looking to bolster broadband networks.

Welch added his voice in support of the technology. “We cannot revitalize rural America if we don’t have broadband,” he said. “And in my mind it’s got to be fiber.” Wicker said that a focus on 5G risks overlooking the ongoing need for 4G in major sections of the country. “We need to recognize that vast portions of our country don’t have access to 4G,” he said. “And we need to win that race.”
Brian Boisvert, general manager of NTCA member broadband provider Wilson Communications (Wilson, Kan.), also took part in the launch, noting that “a connected nation is a stronger nation.”

Discussion about a potential merger between T-Mobile and Sprint heated up after the companies pledged to make 5G a reality across the United States, including rural areas. In response to the companies' promises, two FCC commissioners issued statements in support of the merger, and a third posted on social media that he was leaning toward support of the merger.
FCC Chairman Ajit Pai in a May 20, 2019, statement said he was pleased that the companies’ 5G network would:
•    Cover 97% of the U.S. population within three years of the merger closing and 99% of Americans within six years.
•    “Reach deep into rural areas,” with 85% of rural Americans covered within three years and 90% covered within six years.
•    Guarantee that 90% of Americans would have access to mobile broadband service at speeds of at least 100 Mbps, with 99% having access to speeds of at least 50 Mbps.
The combined network also “would cover at least two-thirds of our nation’s rural population with high-speed, midband 5G, which could improve the economy and quality of life in many small towns across the country,” Pai said.
“Moreover, the companies have offered specific commitments regarding the rollout of an in-home broadband product, including to rural households,” Pai added. “This would give many Americans another option for home broadband service.”
On the same day Pai announced his support, FCC Commissioner Brendan Carr also voiced support for the proposed merger, while commissioner Michael O’Rielly tweeted that he was inclined to support the merger.
NTCA–The Rural Broadband Association expressed skepticism over the promises made by T-Mobile and Sprint in their effort to have the merger approved.
“To curry favor for its merger, New T-Mobile is now making many promises—including a blanket and baseless pledge to solve rural broadband deployment challenges,” said NTCA Chief Executive Officer Shirley Bloomfield. “T-Mobile has had sufficient spectrum and resources to deploy mobile networks in rural communities for years, but it has consistently declined or neglected to do so for even 3G or 4G services. Yet the company now promises to deliver in just a few years’ time services and technologies at a scope and scale never before seen, in rural areas that are in many cases lacking or just beginning to see the kind of fiber infrastructure necessary to realize anything remotely close to what is being promised.”
Bloomfield concluded that “in the end, this merger is far more likely to harm than help rural consumers.”

The agenda for next month’s FCC open meeting includes consideration of a declaratory ruling and third further notice of proposed rulemaking (FNPRM) addressing voice service providers’ blocking of illegal and unwanted calls before they reach consumers’ phones. The proposed action includes a safe harbor provision for providers that block calls that fail authentication but still allow emergency calls to reach consumers.
Also during the open meeting, the commission will consider a report and order and second FNPRM vacating the commission’s 2008 leased access order, and an NPRM proposing to modernize commission rules to improve aviation safety, support and technology.
The open meeting is scheduled for June 6, 2019, at FCC headquarters in Washington, D.C.

Subsequent to the release of an executive order on supply chain security last week that may have ramifications for the company, the Commerce Department also announced on May 15 that it planned to place Huawei and 68 of its affiliated companies on its so-called “Entities List.” The list requires U.S. companies to obtain licenses for export transactions with the Chinese firm and, in most cases, Commerce maintains a general policy of denying applications. This action is anticipated to curtail Huawei's ability to access critical components from U.S.-based suppliers used within its equipment. However, on May 20, the Commerce Department agreed to give Huawei a temporary 90-day license, which, according to Commerce Secretary Wilbur Ross, “will allow operations to continue for existing Huawei mobile phone users and rural broadband networks.” A final rule was published May 21 in the Federal Register.

The U.S. House Energy and Commerce Committee held a May 22 hearing on the LIFT America Act. During the hearing, Rep. Cathy A. McMorris Rodgers (R–Wash.) announced she will introduce a House version of the NTCA-endorsed Broadband Data Improvement Act to improve broadband mapping in rural America.

Walkthrough webinars for the U.S. Department of Agriculture’s ReConnect Program continue May 28.

The commission also said it had taken the steps necessary to provide full funding for all eligible services requested from the Rural Health Care program for 2018.

The FCC’s Wireline Competition Bureau announced that an order instituting a “one-touch-make-ready” regime for pole attachments took effect May 20.

FCC Chairman Ajit Pai on May 22 received the Leadership in Advancing Communications Policy Award from the Association of Public-Safety Communications Officials.

The FCC’s Media Bureau said it will begin accepting next generation TV license applications in its licensing and management system on May 28, 2019.