CES 2018-3: An Ambient Approach to Healthcare

January 10, 2018 – (Las Vegas) The first day of CES is a step off the cliff into sensory overload. I dipped my toe into the pool by attending some conference sessions before hitting the show floor, but even the size of the crowd itself, inching along hallways and escalators, could be enough to make Houdini feel claustrophobic.

After less than 24 hours on the ground, however, one thing is becoming clear: the watchword for this year's program is "ambient." There was a time when technology looked like technology. Now, technology is aiming to be inconspicuous. 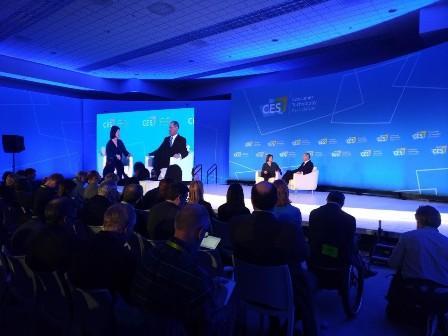 CTA president Gary Shapior discusses net neutrality with Acting FTC Chairperson Maureen Ohlhausen. If I were the conference organizer, I might have set an empty seat on stage to signify the absence of FCC Chairman Ajit Pai, whose appearance was cancelled following reported death threats. It's a shame the debate devolved to this.

This approach was no clearer than in a session titled, "The Invisible Doctor." Digital health (which includes telemedicine) has its own track at CES. Many of the sessions focus less on the "wow" factor (though there is plenty of that) and more on the gradual cultural shift toward greater use of technology in healthcare.

Digital health has two goals: to lower costs, and to improve health. The ideal use case, however, is not episodic. Rather, the use of telehealth and related approaches to treat chronic conditions can reduce costly interventions over the long-run. Or, telemedicine can improve outcomes following a traumatic event. For example, a heart attack patient may be prescribed a regimen of cardiac rehab that may be scheduled for 30 minutes per day over six weeks. Many patients do not comply, but digital intervention could encourage compliance and set a course for longer-term progress. In one study, the patient completion rate jumped from 40 percent to 80 percent. 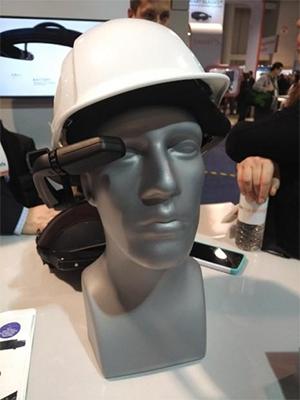 The headset is a "tablet," or at least possesses the functionality of a tablet. The screen appears as a seven-inch screen, based upon its position to the user's eye. The device can be used by field workers to receive instructions from manuals or other personnel.

Digital healthcare can also mitigate economic and social barriers to healthcare. But, as is the case with healthcare, generally, a transition to increased telemedicine and other self-provisioned device-based care will require a significant amount of behavior modification on the parts of both patients and physicians.

The technical aspects are daunting, as well: cultural or emotional perspectives that require that both patients and physicians adopt digital processes are matched by regulatory safeguards, as well. Many personal medical devices can take a seven-year course from design to FDA approval - that is a lifetime and more in the technology field. But, there is a wealth of data flowing from human bodies - literally. A major plumbing manufacturer just patented a "smart toilet." The inclusion of sensors that could replicate the types of tests that until this point have been conducted primarily in labs and doctors' offices could alert users to health conditions well before their annual physical (if they are even accustomed or careful about seeing their doctor each year).

Of course, privacy remains paramount. In the case of digital powder room, one must consider who guest usage would be contemplated.

From here, however, it reasons that it is a question we may soon be asking.

A Visit with the Pennsylvania Economic Development Association